Thyme is an abundant low-growing woodsy herb with tiny, tender leaves and a robust and savory flavor, known throughout the world for its use in medicine and in food. Its humble stature as a common cooking herb belies its presence throughout history as an herb aligned with passion, strength, courage, and protection. Roman soldiers would exchange sprigs of thyme as gestures of respect for bravery, and medieval women would offer sprigs of thyme to soldiers heading out to battle. These soldiers would then take the thyme and place it in their pocket, or wear it visibly as a token. In the Highlands of Scotland, similar associations to courage and strength also appear. The use of thyme to convey and honor courage in battle also speaks to thyme’s symbolism as a protective herb charm in favor of its bearers.

Thyme becomes considerably less ordinary when we investigate its etymology. The word “thyme” comes from the Greek word thýō or the verb thyein; which translates to the English verb “to sacrifice” or “to make a burnt offering”. The noun thyian means to immolate, turn into smoke, or honor a god or the gods. Merriam-Webster, and other etymological sources suggest thymós is connected to another Greek word, fumos, meaning to smoke or create vapors or fumes. As always, I am utterly enchanted and taken up by this history through language, and what it reveals. Among all the layers of plants I’ve uncovered, this is the most dramatic. But it certainly speaks to the presence of the herb as a potent, significant, and meaningful plant to the people, cultures, and regions from which it comes.

Burning thyme appears across North African, Southwest Asian, Mediterranean, ​and European history in use to ward off illness or contagion, cleanse a space after sickness, and deter insects. During various times of illness or pandemic across the medieval and later periods, thyme was used as a fumigant to combat the odors of the plague, and is often one of the contemporary ingredients cited in the famous Four Thieves vinegar recipes, also known as Marseilles Vinegar. Thyme has such a long standing reputation for antimicrobial properties that it was still burned in European hospitals in WWI. It was tucked into pillows and used in bedstraw mixtures for bedstraws throughout Europe to aid sleep and good health, likely due to the same antimicrobial properties that make it a good fumigant. Also, thyme’s comforting and savory perfume lent itself well to good sleep and good dreams, a perfume which also contributes to its associations with love.

The tradition of burning thyme as an offering, and as a fumigant, has a well documented presence in Greece. It was burned in ritual fires not just for purification or offerings to the gods, but also to inspire courage in temple attendees who breathed in the smoke. Thyme was thought to aid in rites of passage throughout one’s life and was placed with the dead and planted at graves to help with their crossing into the afterlife. Because of this, thyme has also gained an association with ancestors and the dead.

Some folkloric accounts relay tales of witches purifying themselves in baths of thyme and oregano; or that thyme set next to milk protected it from being spoiled by thunder. Other accounts cite a sort of anti-demonic protection, when sewn into clothing. Various uses around the Good Neighbors come up occasionally such as in recommendations for incense, ointments, or planting in the garden; but some lore suggests to never bring the flowers into the house.

As to its magical uses, thyme is a common traditional herb in bedstraw, likely due to the awareness of its properties. Dip thyme into holy water and asperge your home for purification and protection. Burn thyme in prayers, as offerings, and incense to perfume your home or clear the air after illness. Thwart nightmares or nighttime anxieties and anxiety dreams by creating a sachet to tuck into your pillow. Create a potpourri to hang over or sit at your bedside to assist sweet dreams. As always, getting to know a plant more closely by observing their characteristics, properties, and behaviors will often be the best guide in their potential collaboration with us, as well as the personal relationships we each build with them.

This monograph is adapted from a series of courses taught in 2019 and 2020 and part of a larger ​project about the use of herbs and woods in a few select European smoke and water practices. I've focused on these practices as a way to point towards some traditions we all have access too, and in the interest of peeling back a few layers onto why these herbs are so popular in our contemporary traditions, today.
Click to go to H+W+S+W main page 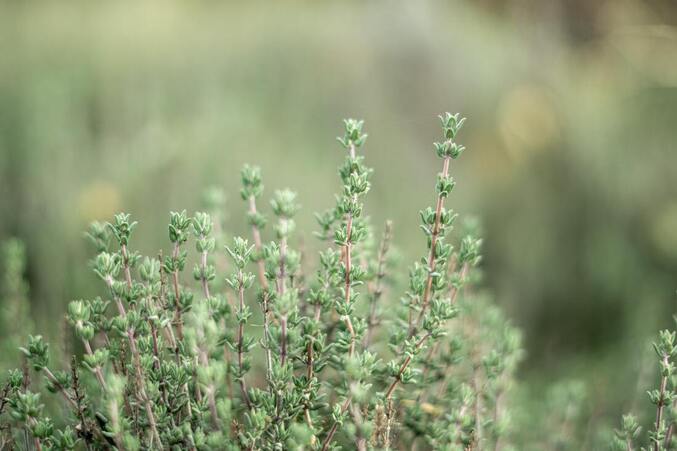