In thinking about the title of Shaun Kardinal’s solo exhibition, Present Tense, one can’t help but turn over the phrase to consider its underlying shape and connotations. As a multifaceted artist and creative with many different projects engaging intricacies in art, design, and curatorship, Kardinal enjoys toying with limitless feedback loops to the recursion of his layered processes, including his titling choices. In activating these games, he places something important just beneath the visible surface that takes time to emerge. The recursions themselves inherently bring the present and the past forward in unison, serving as the conceptual thread that weaves together all these various inquiries, examinations, analyses, comparisons, and problems. Therefore the implied continuity of this phrase “present tense” possesses power as a compound statement; and delivers an impact as two individual words with their own potency forming a syntactic logic: both the phrase and the work in Present Tense are constructed to point at our simultaneous and dynamic mental, emotional, physical, and temporal positions.

To be present, and to be tense, suggests the current state or condition of being; here, now, amidst a climate change crisis, lodged between several colliding pieces of mechanized social and political constructions. The mechanisms themselves are colonial, capitalist governments, corporations, and cultural market forces. The phrase “present tense” describes the collective, contemporary effect on our global society; and the words themselves suggest friction between the futility and ambition of individual action in which we need to be ever present, ever vigilant, in a state of constant unseated suspense. This tension exists between us as people, turned against one another by the flexing muscle of the corporate entity; and it exists as tension between the consumer and the corporation itself, which easily maneuvers to outpace the efficacy of individual choice. It is in these spaces we find how tightly we are tethered. It is in these same spaces we find there is much we can repair.

Kardinal’s exploration of threaded photography began in 2009, while responding to a playful postcard exchange with a fellow artist. He would select various iconographic subjects, sometimes collaged together, then impose a hovering symmetrical design over the top of the original image. The threaded surface poses a few interesting observations — first, the design itself exists as an overlaid aesthetic or narrative; second, the act of sewing employs a method most commonly associated with mending. A needle and thread is reparative, but in the attachment of materials which come apart, the act of patching or reinforcing becomes more elaborate over time, highly decorative, and often depicting an intergenerational history. These are the origins of embroidery that inform the trajectory of Kardinal’s personal practice.

Finding pleasure in the search and the gathering of found photography, Kardinal navigates a playfulness that balances the particulars of his tightly choreographed work to find some sense of chance that while orchestrated, leaves room for surprises to emerge between the layers. The main focus of Present Tense is a series of larger collage pieces which feature geometric designs cut out from the center. Each of these cutouts are then replaced by the displaced cuttings from other images; each of which are in turn treated the same and featured in the exhibition. These shapes become the armature for embroidered linework over the top of the entire design, providing an illusion of light and shadow, and of holding the pieces together. The spaces between each stitch form a window through which you can see how the landscape beneath is different from its topographical surroundings. This is where we find the hidden layer, the parallel world, the suggestion of promise or possibility of a better future that Kardinal hopes to infer, and inspire. 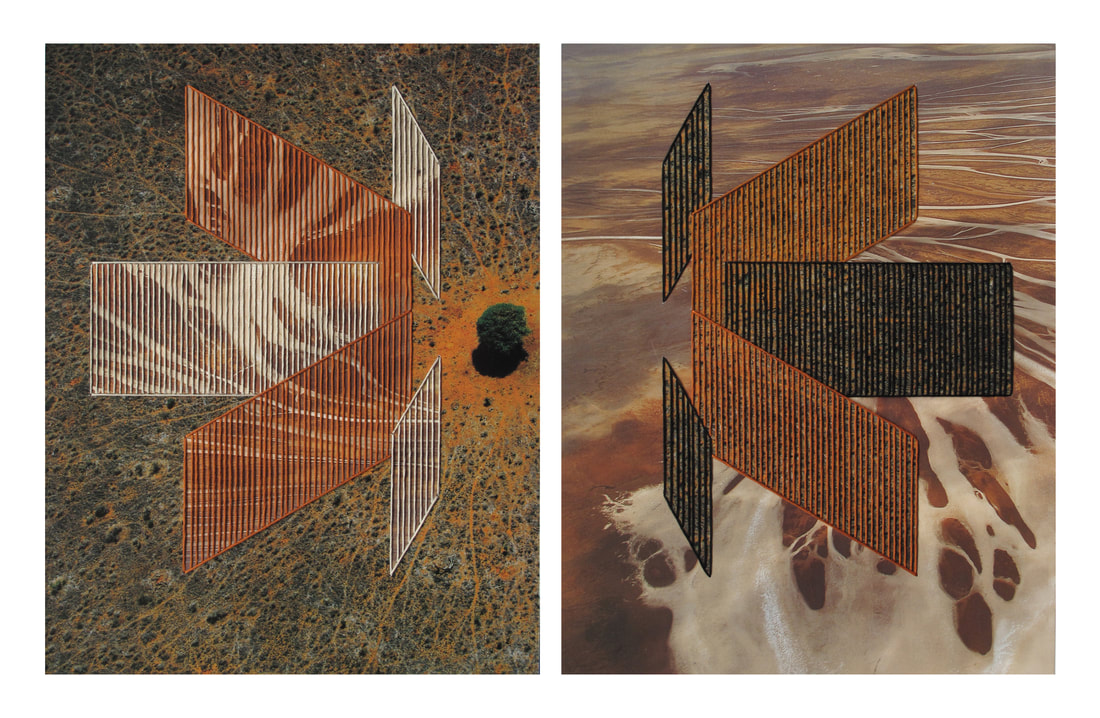 Shaun Kardinal, Apart Together, 2019 embroidered collage 14 x 11 inches each (diptych) image courtesy of J. Rinehart Gallery and the artist
As a result of these processes, Kardinal's stitching has become more integrated with the collaged image than in previous years, creating a visual storyline of color, shape, and form that directly connects the idea to the imagery we see. Therefore it is the particular virtue of Present Tense that the hand of the artist aligns itself with the material and the rigor of his ideas so well. This integration is what both brings forward and underscores the conceptual throughline of Kardinal’s body of work. As multifaceted as they are, Shaun keeps these works quiet, simple, and contained; offered without pretense or expectation. They are what you want them to be, but they are far more if you are ready for them to be.

If the act of sewing is a literal, and metaphorical, method by which we mend something that is damaged, to hold together something that is dear; and if embroidery is a way to beautify something meaningful and tell stories through its fortification; these works symbolize and embody an attempt to bring together the parts of our world we can see and not see, galvanize humanity’s attempt to individually and collectively repair what we have, and salvage a world that not only holds meaning for humans but which holds the space for all life itself. The connection of these parts of our world that we ordinarily divvy up and compartmentalize form a solid statement that the impact on one is an impact on all, and that our actions coalesce to create an entirely new whole. In stitching together these seemingly disconnected landscapes, Kardinal emphasizes the ways they are inseparable by adjoining them, directly.

Through illustrating these connections, Kardinal solves the problem of the prismatic overlay as allegory to mankind’s engineered mark on the surface of the earth. Rather, their varying planes form shimmering windows into other worlds, representing the multiplicity of possibilities and potential outcomes, and opportunities for change. In the way an exploding diagram shows us all pieces of a mechanism at the same time, these forms show us all potentials are probable and already happening, at once, should we choose them. Time, being nonlinear, makes this thought experiment possible and right in tandem, Kardinal uses images of the past to represent the future within it. In this way he provides us a meaningful directive on how to get there: stop, slow down, focus not only on the destruction wrought but the repair we can bring. These symbols are allegorical to the way our actions, which still arguably have an effect on the land but hopefully towards more nurturing ways, can still shift the balance in favor of our continued presence upon it.

Is it possible the geometrical symmetry of these portals invoke a kind of sacred spell towards healing? Perhaps. What’s true is the scored symbols of Present Tense bring something into view we most desire: threads of connectivity, repair, and forward movement towards a future we can envision ourselves in, together. 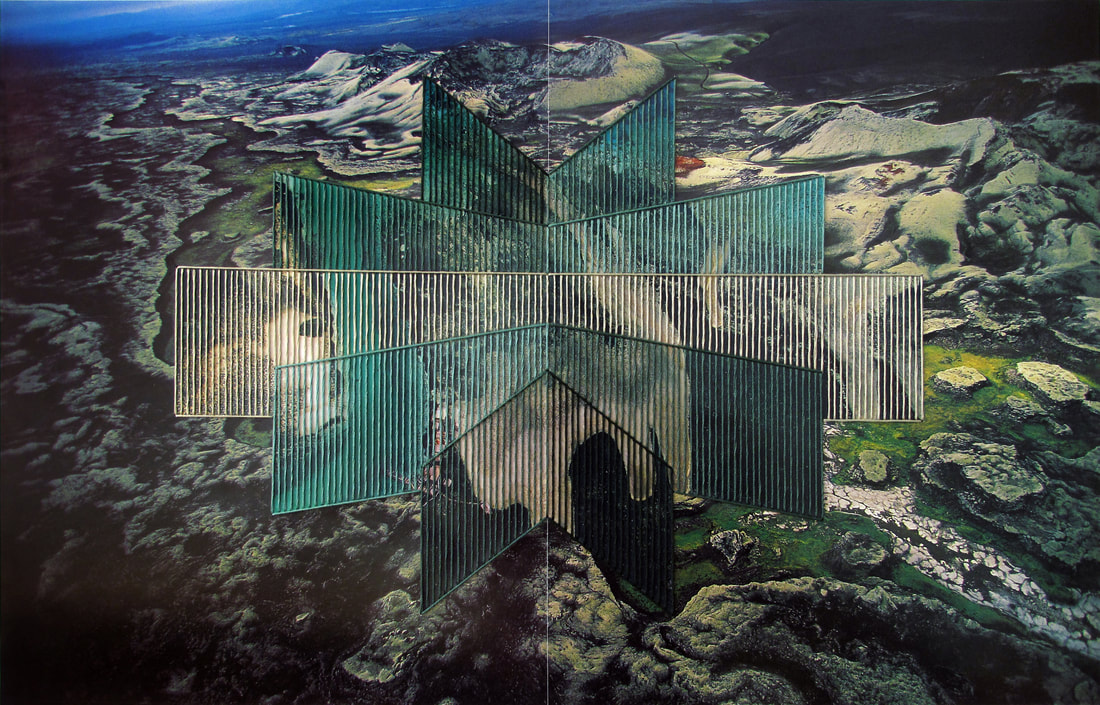 Shaun Kardinal, Impossible Seams, 2019 embroidered collage 14 x 22 inches image courtesy of J. Rinehart Gallery and the artist
This essay was originally printed in a beautiful hardbound coffee table book published by J. Rinehart Gallery in Seattle, Washington. This publication features full-page full color images of the artwork in Shaun Kardinal's solo exhibition, Present Tense, for which this essay was written. You can purchase your copy here!