Rowan, which is also known as mountain-ash in North America, is a deciduous tree with slender, pinnate oblong leaves and a terminal leaf at each end. As a pioneer species, they appear in gardens and forests as either a smaller shrub or tree, or very tall trees as high as 30 feet or more. In springtime, lacy clusters of white flowers appear, and in autumn it produces bright orange-red berries which provide food for birds and insects. The berries, which are actually a fruit, are toxic to humans when raw but when cooked, have a fairly substantial medicinal and culinary history (this is not a recommendation to do this; please do not attempt this).

As a tree with white flowers and red berries, similar to hawthorn and holly, the tree’s sacred associations correspond to the Otherworld in Irish and Scottish lore, as well as deep and effective protection magic. Rowan is known as both a tree that affords protection from the Good Neighbors, as well as a tree and a food that is beloved and therefore protected by them. A popular protection charm is a string of rowan berries, worn by people from the far past to present day, which deepen to a dark blood red as they dry. Strung on red thread or red wool, these are often worn as necklaces or affixed as strings to various charms made of wood, metal, or stone. Similarly to hawthorn, it seems a common thing to regard the breaking off a branch of rowan as unlucky as it’s thought to be a “gentle” tree; and that such an act may upset the fae and lead to a person’s misfortune.

Rowan is also called caorann, known for its protective qualities in charms and in healing, such as those made with twigs of rowan and red thread (most famously tied into the shape of a cross) to protect the barn and the home. Beams of houses throughout England were sometimes built from rowan. Rowan is closely associated with various European festival practices around May such as the Irish and Scottish tradition of driving livestock between two bonfires for purification. And in line with the practicality of this, a remedy for strangles, also known as distemper, in horses; shows up in the use of smoke from burnt wood. At midsummer, Bealtainne, rowan boughs are burnt on the byre doorsteps (a byre is like a barn or other dwelling that houses livestock) ; and at St. Michael's Eve and the Feast Day of Mary bannocks are toasted over a fire made with rowan wood. Bonfires for divination were supposed to have been set by the druids of both warring armies in The Siege of Knocklong, in which rowan was ritually cut, consecrated, and burned with a spell to see visions of the battle’s outcome in the smoke and flames, and the direction the fire would ultimately take.

Rowan is also otherwise associated with fire, and fire is associated with Brigid, one of her aspects being the blacksmith and keeper of the flame as well as her relationship to animals and livestock. Alongside associations with fire and cattle, rowan appears in the Irish ogham alphabet as luis; which is translated to flame. Luis in the ogham tracts represents many other things, not just trees, such as wind, land, colors, skills, ideas, and more. So as a letter associated with domesticated animals and rowan, luis’ kennings stand for “friend, attraction of, sustenance of cattle” or “luster of eye” ie, “flame”. The luster of the eye could be a kindling of passion or inspiration; or the first fire ignited after a long winter such as the fires of Imbolg. While luis isn’t associated with blacksmithing as directly as tinne is; its association comes through the evocation of Brigid, the smith. The fires of blacksmithing are highly mystical, as smiths were regarded as powerful and potent as spiritual healers and practitioners. The forge’s ability to create a flame hot enough to transform and transmute materials meant the keeping of that flame was a sacred act towards the end of accomplishing deep and magical work. Therefore we see throughout Ireland, and other parts of the world where people honor Brigid, flametending is a tremendously important part of devotion to her. Rowan is a strong and very direct communicator in any working with ogham, in this regard.

Though we learn that fire made from rowan is a sacred fire, I haven't yet come across specific uses of rowan for fumigation or incense in any European tradition, nor for cleansing with water, however that doesn’t necessarily mean people didn’t use rowan in these ways. My resources are admittedly limited for the time being (but again, I hope to keep adding to this project if/as I learn more). But given rowan’s abundant associations with protection magic, and historical use in sacred fires for ritual, ceremony, festivals, medicine, and cooking; I certainly feel the bark or shavings of the wood may be a great addition to the ingredients we use. Burn rowan in any kind of prayer for protection or protective magic and consecration, or make a lustral water using rowan bark, leaves, or berries for any kind of protection charm and magic. Look for rowan, or mountain ash, in your surrounding area to see where they grow and who grows with them, how their flowers and leaves develop and when they emerge throughout the year, and get to know them over time!

This monograph is adapted from a series of courses taught in 2019 and 2020 and part of a larger ​project about the use of herbs and woods in a few select European smoke and water practices. I've focused on these practices as a way to point towards some traditions we all have access too, and in the interest of peeling back a few layers onto why these herbs are so popular in our contemporary traditions, today.
Click to go to H+W+S+W main page 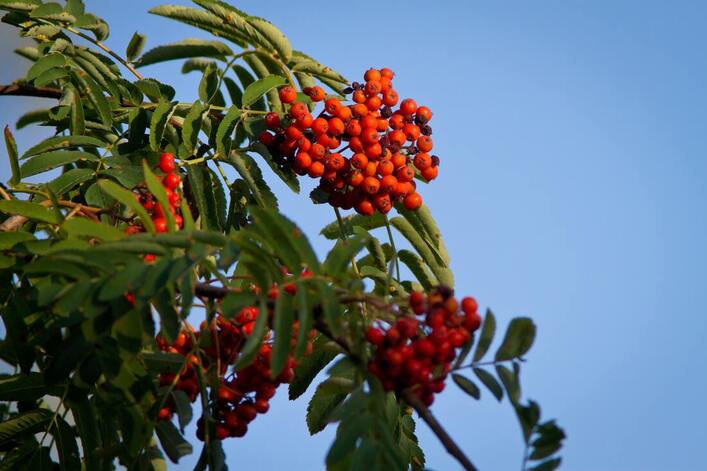