Pine and fir trees are resinous evergreen conifers that grow throughout the Northern Hemisphere, and are among the oldest, and tallest, trees on earth. Methuselah, a Great Basin bristlecone pine in California’s Ancient Bristlecone Pine Forest of the Inyo National Forest, is 4,852 years old. And the Doerner Fir, or Brummitt Fir, is a coastal Douglas fir in Coos County, Oregon, standing at 327 feet tall. For comparison, Hyperion, the world's tallest coast redwood, stands at 380 feet tall and is the world's tallest known tree.

Having this stature and longevity, pines and firs carry reverence and symbolism with them in all cultures where they are found. Pines and firs are often associated with new life, long life, and the enduring nature of life; likely due to their vibrant, green presence through the coldest, darkest months of winter. In the Irish ogham manuscripts, pine is one of many associations with the letter ailm, which is recorded as symbolizing a sharp cry, as in a birthing (into life or death), or a revelation. Other various kennings associated with ailm range from the loudest groans to the beginning of an answer, expression, or calling. In regards to beginnings, pine carries a relationship to birch (beith, in ogham) in this association, however, the difference to me is in the transformation of its arrival, rather than the advent or initiation. And as part of the symbolism of birth, the origins of our wintertime tradition of celebrating around an evergreen tree are rooted in Northwestern and Northern European traditions of decorating the home with branches of juniper, ivy, and holly to symbolize enduring life and to bring protection and good luck through the winter to come. Pine, again alongside birch, was and is still often burned at the midwinter solstice bonfires or as a Yule log.

The Scots gaelic word giuthas translates to "resinous" or "juicy tree", and the Proto-Indo-European root of pine also means "fat, to swell” due to the wood being so laden with pitch; and in fact, fallen pine is commonly known as "fatwood" due to the fact that the dead tree still holds the pitch for years afterward. Acting as a preservative of sorts, the resin in the wood means the tree takes time to decay. This resin often recedes into the stump, which can then be cut into kindling which will also last a long while. Fatwood can serve a practical purpose for illumination as a candle, but it also has a history of being burned as a fumigant or an incense. In the Orkney Islands, and other regions of Scotland, saining was performed for mothers and newborn babies with a flaming pine candle (aka fatwood) spun around the bed three times. Across Scandanavia, fatwood is called tjärved, and is used similarly (I don't have a citation; I'm still looking for the history of the use of tjärved as an incense but this is fairly commonly known).

Both Scottish and Irish histories record people recovering “bog wood” or “bog pine” which is pine wood pulled from bogs, splintered, and burned as candles. Also recorded in Scotland is the practice of gathering bog wood and tying it into large bundles to create torches. These were then carried around the boundary of one’s property in a clockwise direction, claiming the land in an agreement with the spirits of the land on where the boundaries lay, and in that way establishing the ways in which people and spirits of the land live together harmoniously.

Erma Gunter, in her book, Ethnobotany of Western Washington: The Knowledge and Use of Indigenous Plants by Native Americans, describes some Coast Salish magical uses, specifically the pine cones' use combined with fire for various purposes from prayer to divination; and they were regarded as good protective charms. The fact that the Gunter book points at the use of fire with pine cones makes me think about how there is an ecological dependency upon fire in the PNW landscape, and Douglas fir in particular is highly resistant. The pine cones also benefit from fire, as the seeds spread when the cones explode. So in the folklore of this bioregion, there are some incredibly potent symbolisms present just based on observation alone.

I'm still seeking sources for smoke or water rites using pine, spruce, and fir throughout Europe. But also, it’s my belief that using what we do know of the lore goes really well with examining the properties, characteristics, and behaviors of a plant; and building a relationship with the plant alongside our knowledge of the history. Pine, being tall, prickly, and pungent is often associated with fire (naturally, due to its use as a fire-producer and also for its resistance to fire), protection and purification. The needles, being sharp outward-facing, and pungent, are great for protection and purification; the cones themselves have both protective qualities and potential for blessings (cones close up when cold, open when warm, and spread seeds); and the resin is ideal for offerings, journeying, prayer, blessing.

Pine and fir needles, cones, and bark can be burnt during the winter months to purify and cleanse the home, or burnt at any time to send back spells or drive off malefic energy. Pine and fir needles are wonderful for use as strewing herbs on the floor for fragrance and for protection from evil or for aromatherapy—in a Norfolk herbal remedy, breathing in fragrance was said to have had a therapeutic effect on a polio-like ailment; and there is a recorded Welsh remedy to “sniff the pines”. Dried and powdered pine resin is often included in incense recipes and this is easily made at home. In any recipe or circumstance that calls for a collaboration with pine, I feel fir or spruce could also be worked with for their shared characteristics and qualities.
​
As an aside:

​Western hemlock (the conifer, not the poisonous plant) may require its own monograph separate from pine and fir with an extensive history of medicinal and spiritual use on Turtle Island. Western hemlock is a very tall, long-lived climax species in Pacific Northwest forests, and therefore has an older, gentler feeling to my personal gnosis that speaks deeply to ancestor work, journeying to the Otherworld, and honoring the spirits of the land. As a “gentle giant” so to speak, it doesn’t feel related to the same protective guardian work as the more bright and fiery pine, spruce, and fir; however, this is only my own personal perspective and my own reasoning. Depending on where you live, you might be nearer to mountain hemlock, eastern hemlock, or Carolina hemlock. If you are fortunate enough to live in a place near western hemlock and you’re able to become friends, this is a really beautiful smoke ally. 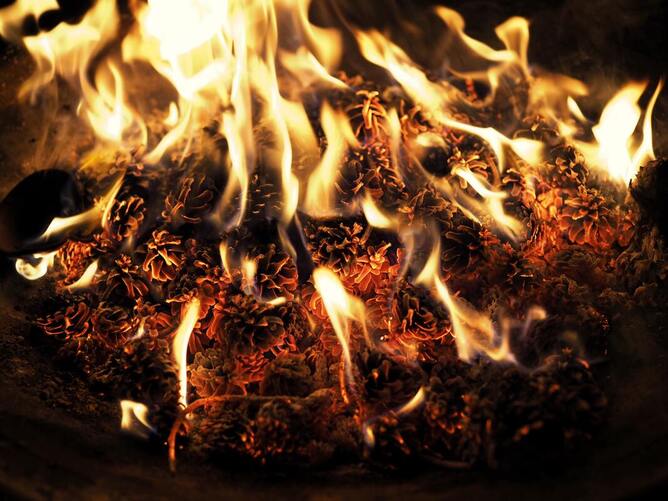