Mugwort carries a rich and complex history across a multitude of global cultures who share similar uses of the herb for protection, purification, medicine, and ceremony. With its folkloric and medicinal presence being so similar in significance throughout the world, mugwort may be one of the oldest herbs known to be used by humans. In Germanic traditions, it’s known as Mater Herbarum, the Mother of All Herbs, and is held sacred in the Anglo Saxon Nine Herbs Charm which begins with "Remember you, mugwort, what you made known, what you set in order at the Great proclamation, you were called Una​, the oldest of herbs". The Greeks associated mugwort with the moon and Artemis, goddess and protector of the wilderness and animals, the hunt, the moon, women, and childbirth. Romans planted mugwort along roads to later gather and place in their shoes as a preventative to aching feet during a long journey. A popular Roman invocation to be used when picking mugwort is, Tollam te artemisia, ne lassus sim in via, “I take of you, Artemisia, lest I grow weary on the road”. A similar quote appears in an Irish folkore database in which someone says, "It is an old saying, If a footman put mugwort in his boots in the morning he may go 40 miles before noon and not be weary."

In Northern Europe, mugwort was associated with the thunder gods, and its powers to ward against malefic entities was believed to be most powerful in midsummer when the length and heat of the day are at their greatest potency. Other summertime associations are with St. John the Baptist who was said to have worn a belt woven from leaves during his time in the wilderness and is often called "the girdle of St. John". In his honor, crowns of the leaves were worn during St. John’s Day to protect against possession. Mugwort from the previous year’s harvest was thrown into the festival bonfires of St. John’s eve for protection and purification of the herds, and to ward against misfortune. On Assumption Day in Germany is a tradition of burning mugwort in the stables to ensure the health of the animals. Related to St. John’s Day, across a few European traditions, leaves were traditionally gathered either at the midsummer solstice or in August, and the root gathered in autumn. The folklore suggests people believed the plant was at its magical peak when about to flower; and it turns out the plant’s more toxic properties come forward after the plant has flowered. Mugwort was used as a powerful fumigant to drive out sickness or cleanse and purify a space after illness, in North America, Europe, and Asia.

During the Dragon Festival in China, bunches of mugwort are hung in the home to ward off evil spirits. In Japan, smoldering mugwort keeps the spirits of disease at bay who are presumed to dislike the odor of the burning leaves. Medicinal use of mugwort across East Asia appears in the treatment of moxibustion, a method in which mugwort leaves are dried, powdered, and pressed into a stick and smoldered across acupuncture points in the patient.

Across North American Indigenous traditions, mugwort has a multitude of medicinal uses. The plant is boiled as a compress for sprained/strained muscles or broken limbs; or leaves/twigs pounded to make a poultice for rheumatic issues, bruises, itching, sores, poison ivy, eczema and other skin illnesses. The leaves are dried, crushed and used as a tea or decoction, as are roots depending on the need. Leaves or seeds are placed on hot coals during sweat baths, and smoke fumigation is used for everything from medicine to ceremony.

​Across the world, plants in the genus Artemisia, after Artemis, are sacred herbs. Many of them, mugwort included as well as wormwood, are used to awaken spirit and clairsentience in ritual, ceremony, journeying work, trance, and dreams. Methods to do this were either to ingest as a tea or fill sachets with the herb and place them inside or beneath a pillow; inhale through smoking; or burn as recels, although these last two are extremely potent! In Berkshire, mugwort served as a recreational smoking herb (similar to coltsfoot) rather than tobacco until well into the 19th century (please don't do this).

Mugwort’s culinary uses are extensive! Artemisia's most famous use belongs to its cousin, wormwood, as an ingredient in absinthe. But second to that is mugwort’s use in beer craft, prior to the introduction of hops—Europeans were very slow in adopting hops and many beermakers used mugwort well into the 19th century. The plant was gathered while flowering and dried before using in beers and ales. As a bitter herb with a musty fragrance, it contributed flavor of course but also mead was known to be a ceremonial drink for seers, diviners, and spiritual practitioners in Northern European traditions. Of course it was also used in tea for the same purposes but also by the working classes of Cornwall when prices of imported tea were too high.

In European cooking it was used to season fish and meat, particularly big game; and in Germany, mugwort is still a traditional seasoning for sausages and Christmas goose. It appears in recipes for soups, salads, stuffings, and dumplings, and particularly to cut through fat and fatty meats and aid digestion. German settlers in the Americas brought many of the culinary traditions with them and finding mugwort in abundance here, continued using the herb in stuffings and meat dishes; including and especially roast goose. You might want to look to your Midwest aunties' cookbooks to see if this is a recipe in your own familial archives!

In the springtime in Japan, boiled young mugwort shoots flavor rice cakes called kusa mochi and hishi mochi (lozenge rice cake). The Hakka Taiwanese also use it in doughy sweet dumplings. Across Asia, mugwort is used as an ingredient for flavor and coloring in cold dishes like rice cakes, or stir-fried with fresh or smoked meat, pancakes, and soups. In both North and South Korea, young plants are used in a traditional soup containing mugwort and clams; or mixed with rice flour, sugar, salt and water and is then steamed.

Some of the magical uses of Artemesias have been previously described in the histories and folklore; but common uses of mugwort across the world include ceremonial burning or drinking for magical use. Various North American traditions call for rubbing mugwort leaves across the body to ward off ghosts or carry them in a pouch to prevent dreaming of the dead. Across Europe it is believed mugwort will also avert the dead or other nefarious entities from entering the house or a person. Carrying the herb in a pouch will ward against wild beasts (because Artemis!) and poisons. Placing a sachet of mugwort beneath your pillow induces deep journeying or visionary work, and dreams. A branch kept in the house after having been smoldered in the bonfires at St. John’s eve would dispel hostile magic and drive away ill-intending spirits. Mugwort was also used to asperge children and children’s bedrooms; and homes in general; in the interest of safety and well-being. Toss mugwort into your hearth fire to ward against the dangers of wind, storms, and other dangers. Its use as a protective herb is well-established, but particularly outlined in this stanza from the Nine Herbs Charm:

Mugwort is the most common herb ceremonially burned as recels (the Old English word for incense; pronounced ray-kels or rey-sells) before ritual gatherings, ceremonies, or divination to clear the mind and heighten the senses towards the purposes of an altered or trance state. The act of burning itself is known as recaning (reekening). Often in the same contexts, a mugwort mead is drunk as well, or in place of the burning herbs. In some Northern European traditions, the ceremony both begins and ends with the use of the herb. Many modern pagans make washes out of mugwort to cleanse and purify their altar and magical items; especially scrying objects and other divinatory tools. Many people will also often leave a sprig next to their favored divination tool to assist them in their work. In general, mugwort may be used in amulets, sachets, potions, baths, washes, and incense. 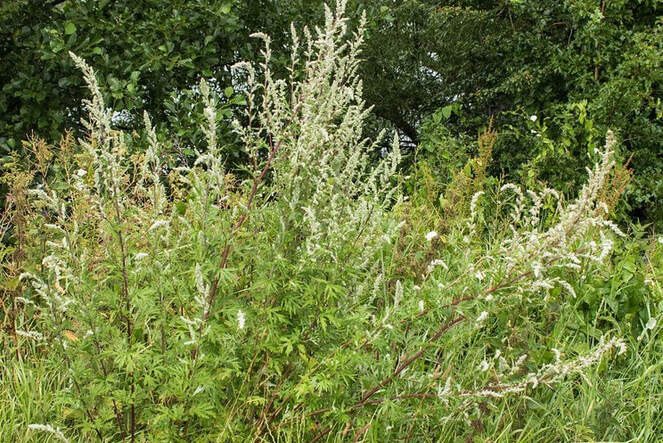 *German wikipedia entry for Beifuß, which I find interesting and have included because while Wikipedia can present some problems, this entry adds up when cross-referenced with my other materials; and, I find the extensive list of common names really fascinating, as it demonstrates the importance of this herb, culturally
​
CULINARY RESOURCES
​
Bavarian-American Midwest recipe for roasted goose
Bavarian-American Midwest history of mugwort/beifuss in community
German Food Guide recipe for goose with mugwort
Lin Edwards, Brewery from 500 BC reveals its secrets, Phys.org
Madeleine Pelner Cosman, Fabulous Feasts, Medieval Cookery and Ceremony, New York NY, George Braziller, 1976
Mugwort entry in Pflanzenkunst
Recipe for German Filled Roasted Goose
Recipe for Weihnachtsgans or Roasted Goose – St Martins Gans
Wikipedia entry for Grut/Bier