Most people probably know juniper best as the main ingredient in gin, a clear spirit distilled from the fleshy dark blue berries (these berries are actually cones, as juniper is an evergreen conifer); but we also associate the dried berries with various meat and fish dishes, as they compliment big game and hearty fowl with a pungent, earthy bite. Several historical Northern European medicinal uses of juniper include a decoction of berries and leaf tips, and it was widely thought to use dandelion in the spring and juniper berry in the autumn for the ailments they treat. Pennsylvania Dutch recipes call to boil juniper in red wine for a variety of remedies, including exorcism and warding, and another similar recipe appears in aid to "pass gravel". Across North American Indigenous medicines, juniper is relied upon for a multitude of health needs. Methods of use include decoctions or infusions of roots, leaves, branches and bark; decoctions of berries; steam from boiling branches; chewing berries/cones; adding cones/berries to an infusion; and more. Juniper is a sacred ceremonial plant used in ceremony across North America, which hosts at least two different varieties of between California juniper and Virginia juniper.

Juniper is burned for purification rites and fumigation throughout the world. In Ancient Greece, Hippocrates speaks of burning juniper as fumigation to clear the air in the event of sickness; and was offered to the gods, as a stimulus to physical human stamina. Because of its aromatic qualities, burning makes sense but also as an ingredient high in antimicrobial properties, it’s not surprising to see it used this way, or in its other medicinal applications such as dressings for wounds or skin ailments. Additionally, for people across Europe from the northernmost parts of Scandinavia and Finland to the Mediterranean and SWANA regions, juniper branches have often been burned in ceremonies, placed on floors  to walk over and release the scent into the air, and hung at doorways and hearths, as well as fences and barns for protection against malefic magic or harm. Some accounts suggest the hanging of juniper acts as a spirit trap, forcing spirits to count every needle and since there are so many, keeping the spirit occupied. Purification rites include bonfire ceremonies such as the Orkney springtime ritual of driving cattle through the smoke to purify them for summer's grazing season. Across Scotland, juniper is burned at Hogmanay, the Scottish New Year—a purification and a blessing ritual. In Southeast Asia, local people of Lahaul Valley in the Northwestern Himalayas India have a longstanding folk tradition of offering juniper boughs and leaves to the deities; and collect juniper leaves, boughs, and wood for religious use in general, as well as for building and for medicine.

Occasionally, juniper is associated with more solemn stories of woe. Various European superstition warns against dreaming of juniper, as it's an omen of ill health or death. Welsh folk beliefs sometimes infer that if you cut down a juniper tree, misfortune will soon follow. And the Brothers Grimm recorded a German folktale titled The Juniper Tree, a grisly story of murder and hubris but in speculation, The Juniper Tree is also a story of a protective guardian spirit, rebirth, and transformation; and ultimately, justice.

The etymology of gin's name comes from the French and the Dutch words, genévrier and jenever. The origin of the spirit’s use is speculated to have been medicinal long before the Dutch monks wrote a recipe in the 1200s in Der Naturen Bloem, which calls for juniper berries to be boiled in rainwater or wine to treat stomach ailments. An earlier 13th Century manuscript written by Thomas van Cantimpré, Liber de Natura Rerum, also introduces juniper as a way to treat stomach pain. What we now know is the bitter nature of juniper stimulates bile and other gastric juices thus easing digestion, settling the stomach and calming gas, bloating, and cramping. Like many alcoholic spirits, gin serves an important historical role in our food histories as first, a medicinal digestive aid and relief, and later an enjoyable, recreational libation.

​Across northern and central Europe, including Scandinavia, France, Germany, and Hungary; people use the berries directly on meats such as venison, lamb, goat, veal, quail, pheasant, rabbit; and any other type of game. The berries add a spicy, pungent flavor to many foods, such as both baked and pickled cabbage, sauerkraut and other fermented vegetables, gravlax (Scandinavian cured, not smoked, salmon), and cheese. The berries can be made into a sauce of their own, very popular with goose, duck, and other fowl; or to flavor jams, jellies, and aspics. In Eastern Europe, juniper brandy is popular and made from fermented juniper berries into a distilled wine. One such wine, Spišská Borovička, is a dry, gin-like alcoholic beverage popular in Slovakia and the Czech Republic, with variations such as Kraški brinjevec appearing in Slovenia, Poland, and other Slavic countries. The Finnish beverage, Sahti, is made from malted and unmalted barley, rye, and oats but flavored with juniper berries instead of hops (though some varieties may use both). The mash, sahti wort, is very loosely filtered (the drink itself is considered and classified as "unfiltered") through juniper twigs and branches, the kuurna, a long, curved wooden trough, historically carved out of a tree. This beer is regarded as one of Finland's traditional and ancient rustic beer styles, carried out since before the 12th century. The ash of California juniper berries is a good source of calcium according to some Navajo uses. The berries of North American juniper species are sweeter, drier, and are therefore easily ground into a grainy meal, and multiple Indigenous cooks across the continent have historically used these to make cake-like baked foods but they are also used in many of the same way as European varieties.

Juniper is almost universally considered a sacred tree across cultures throughout the world from Chinese, Tibetan, European, Southwest Asian, North African, and North American Indigenous cultures. It is thought to ward against malefic magic, illness, and general negative forces. It’s widely used as incense or smoke medicine; blessed water, or saining, as a powerful protective and/or cleansing and detoxifying tool, and as a talisman of subtle energies.

A large number of Indigenous uses of juniper vary between tribes across Turtle Island, but are regarded ceremonial medicine, burning the leaves for incense or creating a steam from boiled twigs and berries; a tea or infusion of leaves, twigs, and/or berries might be poured over hot stones in a sweat ceremony. Depending on the tradition, the lodge itself may also be built in part from the juniper. Juniper is also a wood frequently used in saunas across Scandinavia and Finland. In many folkloric practices throughout the world, juniper is hung outside or inside a home or burned in ritual for protection, worn as an amulet or medicine bundle around the neck to ward against evil spirits, or a sprig is carried as a protective charm before setting out on a particularly dangerous venture or journey. It isn’t unusual for plants described in folklore as having properties that drive off bad spirits or ward from the evil eye also have some degree of anti-microbial properties, and as noted earlier, this is also true for juniper. In Scottish, Irish, and some British traditions, juniper is burned in the purifying bonfires of Beltaine and other festivals, and most famously in January during the great Hogmanay festivals in Scotland during the rites of the new year. Scottish and Irish purification traditions include saining by both smoke and water, often infused with and blessed by juniper leaves. Traditional witchcraft, cunning craft, and other witch practices call for burning juniper in ritual protection and blessings of the home, and rituals for prosperity, health, harmony, and protection against any harm, disease, the evil eye, or ill-doings. Many traditions that engage divination, journeying, and seership burn juniper to aid in their divinatory work. If you have a hard time finding mugwort, juniper can substitute in this healing, visionary, and/or ceremonial work! The properties of juniper lend themselves to magical workings in protection, talismanic magic, prevention/curing of illness, detoxification, fumigation and purification throughout the world. You can use juniper in any protective, prayer, or offering works in amulets, sachets, baths, washes, oils, incense, lustral or holy waters, saining, or smoke!

In regards to sacred smoke, a Scottish New Year tradition is saining with juniper, still very much a living tradition for a good number of people, and as many people learn more about Scottish folk traditions, we're seeing a good many people bring back its return. Scott Richardson-Read has extensively written on Scottish folk magic and tradition (including saining pratices) on Cailleach's Herbarium, and I highly recommend reading it! But just to cover a bit here, there seem to be quite a few methods around how to traditionally perform the saining rite at the new year (though this was done at other times and places as well throughout the year). It seems that generally water was collected from sacred stream and juniper was gathered the night before. While it was traditional to remove the entire plant from the earth and bring it to the home, today we gather juniper from a bush or a tree with whom we have a relationship, and take a symbolic rather than an abundant amount (though if possible, substantial enough to ensure fumigation of your entire home). The water would be made into menstruum (in this case, different from the menstruum herbalists are familiar with; this refers to silvered water, created with a spoken charm: tháirgeadh, airgead, uisce. This translates roughly to production, money, water) and juniper left by the hearth to dry. In many cases, this work was done under specific conditions (such as nighttime, and pulled by hand with no use of iron) or circumstances (water collected from a “dead and living” stream, gathered in silence) and accompanied by specially dedicated prayers, oftentimes syncretic with Christianity.

The next day, the entire household would gather to prepare for the ceremony, sealing the house up at all openings--doors, windows, and anywhere there was a crevice or a crack--so the smoke would be contained within. Everyone would gather for the ceremony, take a sip  (if you're using living water from a stream or other source, please don't drink this; you can simply mimic the gesture), then the rest was sprinkled throughout the house with a particular focus on the four corners and the beds. The juniper on the hearth was then burned at the hearth or carried burning, through the house, filling the sealed home with smoke to the point of dense fumigation. Once this was complete, the seals were removed, and all doors and windows opened to release the smoke and air the house out. The household drinks a round of whiskey to their collective health and eats the first breakfast of the new year! 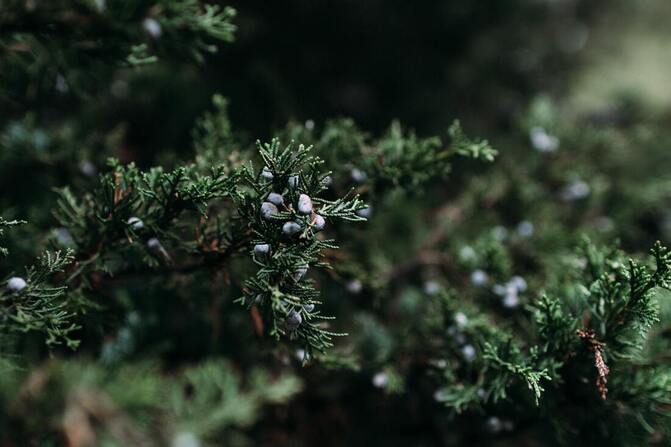 ​*Some of the info in the culinary section is uncited, as I’m drawing on my past work as a chef and therefore have some stored ambient knowledges acquired over time and with experience