Blackberries are ubiquitous throughout the northern hemisphere. Here in the US, the Himalayan blackberry has become largely known as an aggressively invasive species, but you can still find local species here and there, depending on where you are. For example, in the Pacific Northwest, the native blackberry is a low-growing species covering the ground. But for other types throughout the world more similar to the Himalayan species, blackberries can grow up to twelve feet in height when untended, forming impenetrable thickets of entangled vines, which can be quite large. Their delicate, white to blush-pink flowers bloom from summer into early fall, forming clusters of berries which are technically aggregate fruits—groupings of individually encased seeds that grow together. Blackberries are most famous for their robustly flavorful fruit, which are a late summertime favorite, foraged everywhere from empty lots and greenspaces in cities to wild overgrown hedgerows of brambles in the countryside. Next to their fruit, blackberries are obviously famous for their large, sharp thorns. With canes growing up to an inch in diameter, briars growing in fields can cut ankles and legs as easily as razor wire, and are probably the design inspiration for it to begin with. As a thorned bush, blackberry lends itself immediately to the category of thorny bushes that touch on the lore of the Good Neighbors (ie, fairies), boundary places, the Otherworld, and protection magic.

In Niall Mac Coitir’s Irish Wild Plants: Myths, Legends, & Folklore, Coitir mentions some parts of England have folklore that says planting blackberry bushes on a grave keeps the dead in the ground and the devil out. In keeping with associations with protection magic, he also mentions that blackberries were said to protect against evil runes if gathered during a certain phase of the moon, although it's not said which moon phase or which runes. But this also recalls the way blackberries throw out "runners" to propagate. A large cane which has grown outward and rooted itself elsewhere, forming an arch, is sometimes called a "double-headed" bramble. In folklore, this is described as having magical properties. If one wanted to invoke evil spirits, they could do so while crawling through a double-headed bramble on Halloween, and the devil might give them special powers. In some parts of Scotland, people would place a sprig of blackberry bramble beneath a milk pail to keep the milk from spoiling; or, a wreath would be made and placed in the byre or beneath the milk to protect the cows and the milk from witchcraft and the evil eye, as well as any other inexplicable disease. Blackberry finds itself mentioned in several tales in Irish lore, often referred to as briars or bramble. One piece of lore records briar as a cure for elf shot, requiring a briar that has "rooted itself twice" that must then be wound three times around the animal's body, accompanied by a recited rhyme.

As a fruit-bearing bush, blackberry held a place in the Brehon Laws as one of the "bushes of the woods" which meant that clearing an entire field of brambles was punishable by law. I am definitely speculating here, but given the overall community-minded nature of the Brehon Laws, this seems to suggest that in clearing a field, it was required to leave a certain portion of the shrubs for fruit, perhaps for those less fortunate to come gather. If this is indeed true, it would speak volumes to the cultural cornerstone of community hospitality, sharing, and reciprocity.

In Ireland it’s well known that blackberries are off-limits after Samhain or Halloween, when the púca (a type of fairy) is said to have spit or pissed on the fruit which makes humans ill, accordingly; or ill-fated to misfortune. Some parts of Ireland, Scotland, and England cite an even earlier date, at Michaelmas, and blame the devil for either putting his foot on them or throwing his cloak over them; or like the púca, spitting on them. Of course this is good advice, as these festival markers coincide with the time of year that the fruit becomes shriveled and anemic; waterlogged from autumn rains; or otherwise moldy and rotten. Your bioregional markers will vary—look for when the fruits begin to lose their lustre, and make your determinations from there.

Also related to Irish lore are the ogham tracts. Ogham are an Irish letter system historically used for writing scripts, but also in oracular divination. Each letter has a number of conceptual or abstract associations, as well as a variety of herbs, colors, animals, and trees. Like many people do, I've come to connect the letter muin, which has often been associated with the grapevine, to blackberries instead. Given the presence of brambles as a "vine" throughout Ireland, and the prevalence of both native and introduced varieties where I live now, blackberries seem an aligned candidate for me. ​ A particular kenning from Morainn mac Moín describes “the strongest of powers” or, “strongest of effort, strongest in exertion”. Personally, I relate this to blackberry in the strength and the endurance of the canes themselves and their tenacity; that cutting them back makes them return even stronger, that their entire effort is a push in vitality from the way they propagate to their abundance of fruit. They are one of the hardest plants to kill! But in their provision of shelter, protection, and sustenance; they are also among the most generous.

Dried blackberry canes are used as a potent fumigant in British traditional witchcraft, and when people arrived on the shores of North America, they brought this craft with them to fold into what became American folk traditions. Known as a witch's whisk, or a devil's club, a small bundle of blackberry brambles are tied together and used like a small broom, and occasionally, smoldered while in use. Some people believe it’s important to gather a specific number of twigs, such as thirteen. When the whisk is made before the brambles fully dry, they sometimes fan out, creating a splayed whisk; but some people let them hang dry completely before making the whisk and these form a straighter bundle, like a wand. One end of the bundle is tied in thread, string, or yarn so that the bound section forms a handle (you might want to remove the thorns in this section). One would work this as imagined, by waving the whisk through the air around, under, over, and through whatever needs to be cleared or cleansed. These remedies range from cleansing and clearing a space for ritual, to protecting or cleansing a space of malefic energies, and curse reversals on a person. Sometimes a whisk is even called for in an exorcism. The use of witch’s whisks is related to the use of brooms, both long handled and handheld; in the act of sweeping wanted things towards and unwanted things away; and in the magical act of cleansing and protecting and boundary-making, if not entirely banishing the unwanted. Sweeping doesn’t just happen across a floor but also across a person or an object, and anything else that is precious both living and inanimate.

Clearly blackberry brambles are a worthy addition to incense-making and it seems possible to work with them not just as a smoldering wand or a whisk, but ground up as a loose incense or setting aside the thorns towards similar purposes of boundary-setting, cleansing, protecting, clearing and cutting, or warding; cursing and exorcism; and any other offensive or defensive magical workings. This is one plant that I would highly recommend forming a solid relationship with before attempting any collaboration, and getting to know how they live in your area—when do they bloom, or die back; which varieties grow in your neighborhood and what kind of a home do they provide to the wildlife; what color are the flowers, and when does the fruit ripen? Leave them ample offerings and take your time!

This monograph is adapted from a series of courses taught in 2019 and 2020 and part of a larger project about the use of herbs and woods in a few select European smoke and water practices. I've focused on these practices as a way to point towards some traditions we all have access too, and in the interest of peeling back a few layers onto why these herbs are so popular in our contemporary traditions, today. ​​
Click to go to H+W+S+W main page 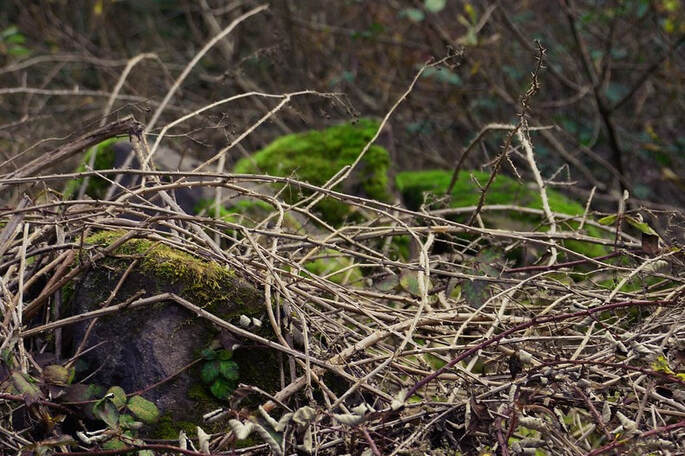