Or the effective accumulation of anxiety, restlessness, despair, and paralysis of something I know now as acedia; cited by Greeks, monks, and appropriately, Walter Benjamin

I’m confronted by the vexing presence of my trauma-provoked inclination to press the record button and disappear into the quiet dark space behind my eyeball; to watch, to remember all of the patterns, repeating

I’m thinking about the time after the eruption of Mt St Helens, or 9/11, and the pandemic, also the forest fires, and the ongoing anti police-brutality protests

the cataclysm, the wasteland, the ghost city, the indeterminable future, the boarded up broken windows and doors and crushed cars, the layer of ash on the sidewalk and in my clothes, the hushed bustle of the streets, the absence of traffic, the permanent ash cloud in the air

In all these places I was here, but not there as in, experiencing everything and living through everything but, not being directly in the middle of anything not being right there at ground zero and yet, finding myself so completely and bizarrely immersed in these things because they are terminally still happening

A vacancy is left by those who fled

The rebuilding and determination and resolve of those who stay

The discoloration of the sky from wildfires both near and distant

So you see, like you I’m in the process of mourning things that are slowly passing away but not yet gone

I have been, my entire life

45 ugly screenshots of things from the desert of the real

45 in place of the name I refuse to say

45 as a number of years I’ve been alive

A life lived like an obsessively collected archive of all I am witnessing, as a screenshot, as an ugly collage, as a documentation of all the things that disappear

No one prepares you for the moment you realize you have more years behind you, than ahead; and the aching feeling of longing it provokes, to savor each moment remembered as though it is also today, and maybe tomorrow; as if by doing so you could somehow lengthen the span of each day

As I mourn and reflect on all that is passing, I am talking to myself and to you, but also to my grandmother

My grandmother is ready, she says. She’s been ready, I know. She no longer concerns herself with the entropic nature of time and instead lives in each moment as a singular event, not a series of marks, and in that way, her sense of time is both rapid and expansive, perhaps noticing when it’s day, and when it’s night; when it’s raining, and when it’s sunny; when there are birds, and when there are squirrels. Soon, the trees will turn and she’ll notice this too. But it’s not time, she’s noticing. She’s simply being.

As her economies of attention are no longer bound to an economy, she has no need for such arbitrary designations as numbers, for example, 45. She is beyond time.

We’re all just sort of…living. Living within the limbo between life and death is a strange place. You don't know where or when you are leaving; a day? Two weeks? Six months? One year? We don't know. Time like this is a surreal space in which we are attempting to pick up the pieces that haven't yet fallen, of looking forward to live life without, even as we are still with, someone

I hope to see 46 more of anything at this point, really

46 different birds outside my window

46 different delicious desserts from across time and around the world

46 moments of confidence in myself

46 declarations of love to my friends

46 species of trees on a walk

Time is nonlinear and therefore each day from end to beginning from beginning to end, regardless of what we do or don’t do with it, is a complete work unto itself, infinitely repeating. Acedia spins towards something more resolute, more decisive, an idea churning. Emerging from the hibernation of my torpor, a new cycle begins. 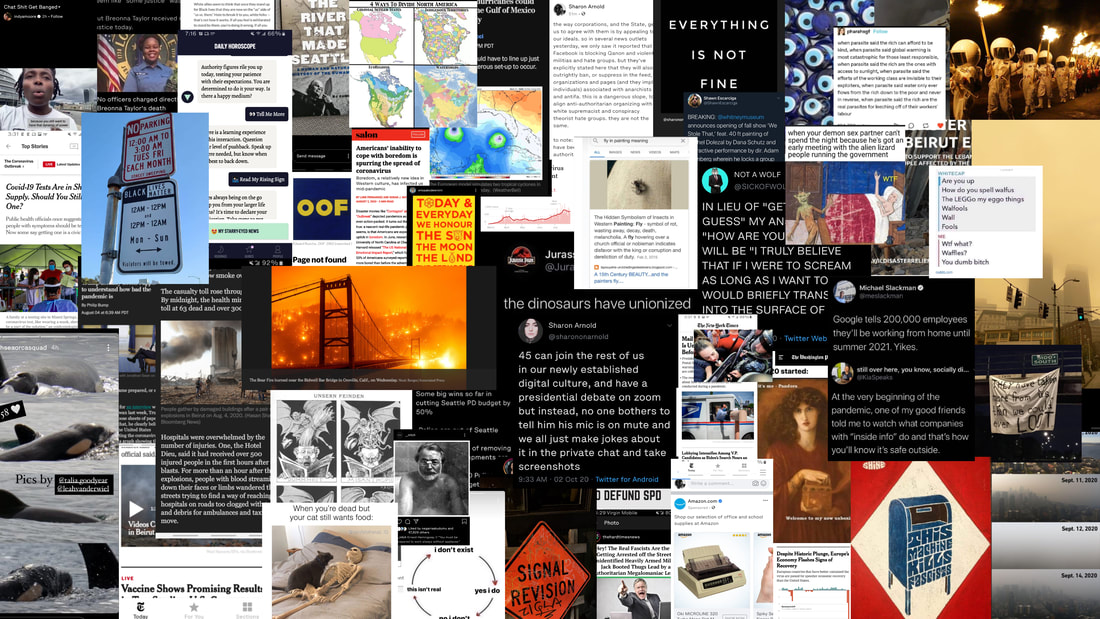 45 UGLY HIDDEN AND EXPOSED SCREENSHOTS FROM THE HEIGHTS OF ANXIETY AND THE DEPTHS OF DESPAIR, 2020, photo collage of 46 select screenshots collected from a Samsung Galaxy S8 between the months of July and October