The word “rose” goes back to the Greek word for the flower, rodos. The Greeks associated roses with lovers; but also with Eros, Adonis, and Aphrodite. It's said that Aphrodite, the Greek goddess of beauty and love, often wore a crown of roses around her head. In Rome, roses are associated with Venus and are a symbolic carrier of secrets. In fact, the term sub rosa (a term meaning, "beneath the rose", suggesting secrecy) comes from the tradition of hanging wild roses above meeting places and tables in the Roman era. Roman brides were crowned or wreathed in roses, and during festivals and games,  processions were covered in roses thrown by joyous revelers such as during the "rosalia", a spring festival commemorating the dead. Athletes, delegates, politicians, and other notable people were honored and adorned with roses. Cleopatra is said to have spent a fortune on roses to decorate and perfume her feasts, banquet halls, and private chambers. In Christianity, the rose is associated with Mary.  In Dante's Paradiso, he refers to Mary as "the rose in which the word of God became flesh". While prayer beads or knots, known as "chaplets", were in use long before, the Holy Rosary of the Catholic Church comes from the term, rosarium, which means "garland of roses" or "rose garden", in which the petitioner spins the beads while reciting a series of prescribed prayers. Said to have been conceived of by Saint Dominic, in a vision of the Virgin Mary in which she appeared wreathed in a chaplet of roses. Inspired by the chaplet and the vision, the rosary was born.

Roses appear throughout Northern European folklore, fairy tales, and history, the main variety likely being the dog rose, Rosa canina, which recalls the familiar five-petal patterning of roses in medieval European heraldry and crests. The famous Thousand-Year Rose, aka the Rose of Hildesheim, is a dog rose that grows abundantly up the wall of the Hildesheim Cathedral, a Catholic cathedral in Germany dedicated to the Assumption of Mary. The legend says that as long as the rose prospers, so will Hildesheim. In central parts of Europe, or especially along the Mediterranean all the way to Turkey, the variety would have been the Rosa gallica, some subsequent varieties of which are known as the Apothecary’s Rose. Some scholars believe this to be one of the earliest cultivated (not wild) roses in Europe (the dog rose is still regarded as a wild variety). Like the dog rose, the Apothecary’s rose is also five-petaled, and appeared in heraldry and crests, and it's theorized the white and red roses of the Tudors represent these two varieties. Here where I live in the Pacific Northwest of North America, on Coast Salish territories; from British Columbia down to Oregon the native rose varieties are Rosa nutkana, Nootka rose or bristly rose; Rosa pisocarpa, aka clustered wild rose; or Rosa gymnocarpa, Baldhip rose, also known as wood rose or dwarf rose. These resemble dog roses in that  they’re a simple five-petal structure but are often bright pink. Southwest Asian rose varieties were brought to Europe around the 11th century, most famously and prized among them, the Damask rose from Syria.

Across the world, food and medicinal histories are deeply intertwined, and we find many similar uses and symbolic associations. Romans scented their wine with rose petals, and rose water was used in Medieval banquets to wash the hands. While lost in modern European cooking (though it began to make a comeback in the 20th century), in medieval times rose water was a common ingredient found in blancmange, a sweet or savory pudding-like dish made with milk (like a panna cotta) and stock; sweet and savory marzipans, a dish similar to what we call French toast; and tarts. Rose is sometimes used as a throat remedy, digestive aid, or a breath freshener. They're high in various antioxidants and Vitamin C. The fruits, rose hips, are used to make medicinal syrups, teas, and marmalade and can be foraged in the wild as a food source during times of scarcity. Across the Mediterranean, Northern Africa, and Southwest and Southeast Asia, rose water is used in meat dishes, and rose powders are used as an ingredient in sauces. Fresh and dried rose petals are used throughout the SWANA regions as well as Europe to make jams, and to perfume both sweet and savory dishes. Rose petals are a popular on cakes and pastries, in which the petals are glazed with egg whites and coated superfine sugar to create a sparkling garnish! If you're interested in a few medieval recipes, check out the resource list below for some easily made dishes you can enjoy today, including a delicious cherry torte recipe with crushed rose petals and rosewater!

Esoteric uses of rose are related to love, harmony, balancing, or peace-inducing potions, baths, and incenses; healing and self-love rituals pertaining to balance, affection, or prosperity; an aphrodisiac; healing poultices, sachets or amulets for any of these conditions, including compassion and spiritual devotion. The thorns are useful in protection or warding work, and rose may also be used to aid against the evil eye. Rose is a ritual food which, when eaten, may open the heart and lift the spirit; or taken in tea before sleep may enhance visionary nature of dreams. Rose has a long history of being used in lustral or Florida waters, or added to floor washes. Dried rose petals added to summery woods and herbs make a soothing incense. 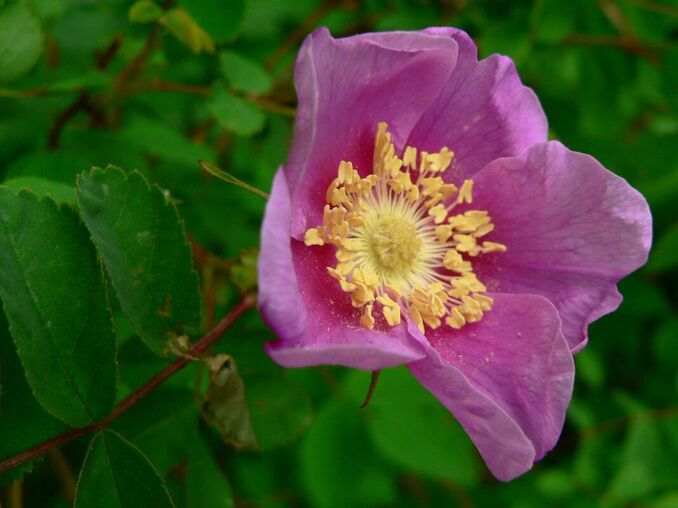