Holly has a strong presence in folklore and medicine throughout the world. During Saturnalia, the Romans were given to decorate their homes with greenery, often incorporating holly into boughs and wreaths. In Greece, wreaths of holly were tokens of blessings of good wishes. Pliny the Elder stated that if holly were planted by a house, it would protect the home from malefic enchantments as well as lightning. Across Northern Europe, holly boughs are used to decorate homes in winter, as it's believed the red berries carry the symbolism of renewed life in the bleakness of midwinter; or that the spirits of the fields and forests might take refuge in the harsh weather of midwinter. Many of these practices were carried forward from these various cultural sources in our contemporary Christmas traditions. Some believe bringing the boughs inside at winter is an invitation or an offering to kindly spirits (or protection against mischievous fairies); but that come spring festival time, the greenery should be burned to symbolize the end of winter. In parts of England, it was regarded bad luck to rid the home of its holly boughs before Candlemas, as illness or death would follow and In Scotland, holly charms are hung at the threshold and considered strong protection, and therefore unlucky to burn at all. In Wiccan lore, the Holly King aka “The Dark Twin” is born/ arises in midsummer to slay the Oak King and rule over the darkest half of the year, to in turn be defeated at midwinter by the Oak King who rules the lightest half of the year. In heraldry, holly is used to symbolize truth; for example, the coat of arms for the Southwestern Norwegian municipality of Stord has a yellow twig of holly against a red shield.

In Northern English folklore, and parts of Scotland, smooth leaves are called “she-holly” and the leaves with thorns are called “he-holly”. The smooth she-holly leaves, gathered on a Friday in silence (the gatherer to remain in silence until waking the next day), are collected in a three-cornered handkerchief. Once home, nine are selected, tied into the handkerchief with nine knots, and used for dream divination, placed under one’s pillow to deliver visions. Like other trees with thorns and/or red berries, holly is associated with the Otherworld and is known to guard boundary places. But the bright red berries are also associated with hot coals, and the forge of the god Goibniu, master metalsmith of the Tuatha Dé Dannan, the predominant pantheon of deities in the Irish tradition. In the Irish ogham, holly is associated with the fires of coal, the marrow of charcoal, a molten ingot; a third of a weapon, a third of a wheel; or a blade. This makes holly, known as tinne, associated not just with wealth but with authority of the arts and craftsmanship. The wood itself is very hard, and starkly white. It was used for shields, weaponry, staves,  and wheels, solidifying its associations with protection and defense.

North and South American Indigenous uses of holly are varied but do have medicinal applications across cultures. It's known among various Southeastern (North American) tribes as “black drink”, an infusion (do not try this) for ritual purification, both physically and spiritually; or to inspire visions and ecstasies.  In South America, Yerba Mate is one of three caffeine-containing holly species whose leaves are toasted over a fire and then made into a stimulating tea, although some people also use the leaves green. The two South American caffeinated varieties, including Yerba Mate, are used as both a social drink and in ceremony before divination. The third caffeinated species is what’s used to make black drink across Southeastern North America, and through records of trade and remnants of pottery, we know this drink made it as far north as the Great Lakes region. While it's commonly understood that black drink incorporates additional herbs,  for obvious reasons (this is a closed culture), that recipe isn’t shared outside of tradition (and as always, please don't attempt to try this).

Holly’s magical associations are deeply rooted in ideas of protection against the forces of nature (and especially lightning), the fae, witches and sorcerers, and other hostilities or maladies. As one of the ogham associations for tinne, holly is sometimes aligned with the Sun as a catalyst for abundance, prosperity, wealth, value, and the brilliance of fresh, hot iron. Holly is also worn, hung up, made into charms or satchels, dried and burned, made into tools to invite and promote good fortune, prosperity, luck, and dreams. Holly can be used in protective or banishing work.  Holly water was asperged on newborns for protection and prosperity, and can also be used to consecrate one’s magical tools and objects. Use holly wood for any magical tool related to the kind of work associated with the plant; it’s common for wands and staves to be made from holly and some prefer their runes to be made from this wood, as well. Because of its midwinter associations of death and rebirth, holly is an appropriate addition to any kind of ritual ancestral work or any kind of magical work related to the cycle of birth and death. 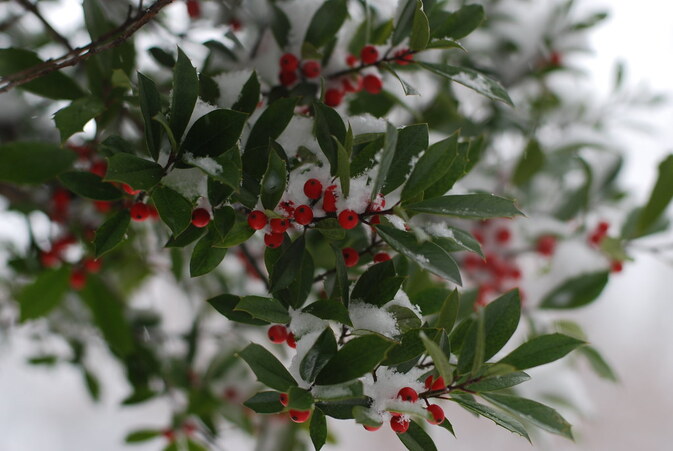