Across Europe and North America, hawthorn is known by a variety of common names such as quickthorn, mayblossom, thornapple, or maybush.  The tree's flowers are associated with May Day festivals and celebrations in England, and are mentioned in various carols as remnants of wassailing traditions, in which wassailers go singing from house to house with various songs in exchange for refreshments or gifts. In May, some of these remaining traditions also called for carrying hawthorn branches house to house while singing songs. When arriving at a house, the Mayers would hang a branch at the door the more "honorable" the house, the bigger the branch. One such carol goes like this excerpt from The Mayer's Song:

Remember us poor Mayers all,
And thus we do begin,
To lead our lives in righteousness,
Or else we die in sin.
We have been rambling all the night,
And almost all the day,
And now, returned back again,
We have brought you a branch of May.

Hawthorn makes an appearance throughout several of Shakespeare's plays, including A Midsummer Night's Dream when Hermia speaks, "O happy fair! Your eyes are lode-stars; and your tongue’s sweet air, more tuneable than lark to shepherd’s ear, when wheat is green, when hawthorn buds appear."  Across various Northern European traditions, the colors red and white symbolize the Otherworld, aligning hawthorn’s red fruits and white blossoms with Otherwordly associations in company with rowan, holly, and blackthorn. The musky, slightly spicy, sometimes gamey smell of hawthorn blossoms could possibly be a reason why so many associate the tree with cycles of sex, life, and death, and why it's discouraged to bring blossoms indoors. While it's generally thought to be bad luck to bring hawthorn into one's home, sprigs of blooming blossoms may often traditionally brought inside at Bealtaine or May Day when they’re hung above the doorway, and colorfully decorated with ribbons and trinkets for good fortune and protection in the coming year.

Hawthorns serve as literal and symbolic hedges, barriers of protection, defense and offense; and mystical boundary places. They are often planted for protection near doorways, but as to their function as a boundary, the art of the hedgerow is to cultivate thorned trees or bushes in such a way as they grow intertwined, forming a natural razorwire-type barrier. In Ireland, where one might find several instances of hedgerows made of hawthorn, the tree is known as sceach gheal in Gaeilge (the Irish language) which means “white or bright thorn”, and is associated with the Otherworld and the Good Neighbors; especially when growing apart from a grove, or when found at the top of a hill, mound, or ring fort. Such solitary trees are regarded as sacred, and never harvested, cut, or otherwise harmed, but often these trees become places on which people place offerings and their petitions for a turn of fortune (usually butter and /or honey; or even some kind of oat cake). These are called cloughtie or clootie trees, and while the practice is now under some scrutiny in regards to the harm synthetic ribbons or the weight of accumulated cloth does to the more popular trees, there's a longstanding tradition of tying a cloth ribbon or rag to a  clootie tree and asking for prayers and blessings for the season to come.

As mentioned, it's regarded bad luck to prune, harvest, or otherwise bring harm to a solitary hawthorn, and it's discouraged to cut one down, because misfortune is said to follow. The most famous story about this involves the DeLorean Motor Company, which planned to build its Northern Ireland factory over the top of a hill on which a single hawthorn stood. The Irish workers refused to comply with cutting down the tree. They were overruled, DeLorean moved forward with the construction, and soon after the company went bankrupt, making this a fun story to muse over on the folklore's cautionary advice. In another story from County Donegal, a very unfortunate Joe McDonough had helped his neighbor Mr. Todd cut a hawthorn tree down after other men refused to help him, and afterwards poor Joe suffered the theft of his child by the Gentry. Unsympathetically the elder women of the town agreed, “That’s the way of it,” whispered the crones over their pipes and poteen—“that’s just it. The gude man has had the ill luck to displease the ‘gentry,’ an’ there will be trouble in this house yet.”

In Chinese cooking, hawthorn fruits are used for jams, jellies, and sweet desserts but most often served by themselves. The number of desserts that are either confections, medicines, or both occurs throughout the world but also in Northern Europe where hawthorn flowers were used in them, as well as rose and elderflower. Later, many of these traditions became sweet desserts as we know them, while the use of flower petals disappeared for a time. Since the fruits, also called haws, are high in pectin, they're perfect for use in jams, jellies, and marmalade; sometimes in combination with rose (again) and often served with meats.

Hawthorn flowers and leaves were and are sometimes still used across Europe in traditional savory cookery, often in salads or in a dish called spinée (a type of porridge made with nut milk). ​Anglo Saxon/Frisian/Norman and precursor populations used berries, stone fruits, and apples in cooking as ingredients themselves; such as savory pottages (a thick soup, stew, or porridge), sauces, and tarts. As an aside, pottages were made with oat, barley, farro, or wheat which all at any time may have been referred to as “corn” in the literature, which is not North American corn, maize; but a  catch-all term for any number of grass grains in Europe.

In the book, Ogam: Weaving Word Wisdom, Erynn Rowan Laurie describes hawthorn as a catalyst for transformation, bringing submerged pain and /or power to the surface from within.  Ogham is an Irish phonetic alphabetic system but also a magical language system based on a broad array of associations and symbolism from animal and plant life to folklore. In support of the tree’s association with both the spoken word and defensive abilities, in the Book of Ballymote we learn that hawthorn was used by the filid (poets) in ritual cursing, exacted at one’s enemies.

For magical purposes, the use of the plant extends even to the wood itself for various uses as wands, staves, stangs, or carved amulets; or other working tools (as it’s ill-advised to trim or cut hawthorn, search for fallen wood). Hawthorn’s vigorous potency makes it perfect for any kind of protective or defensive magic, but it’s recommended to have a very good relationship with the tree and the spirits of the land where the tree lives. When you finally do, berries, bark, and leaves can be gathered for various medicines; create a little sachet or bundle from the leaves for protection at your door; thorns may be carefully gathered for use in sachets or amulets, or even poppets or incense if the work requires. Use of hawthorn in comes up in the Elder Futhark runes as thurisaz or in the Anglo Saxon/Frisian runes as thorn; and in the ogham as h-Úath. I wouldn’t say the associations really cross over from runes to ogham but you do get into a kind of overlapping list of associations and uses around protection, defense, offense, cursing, shielding, and transformative change. 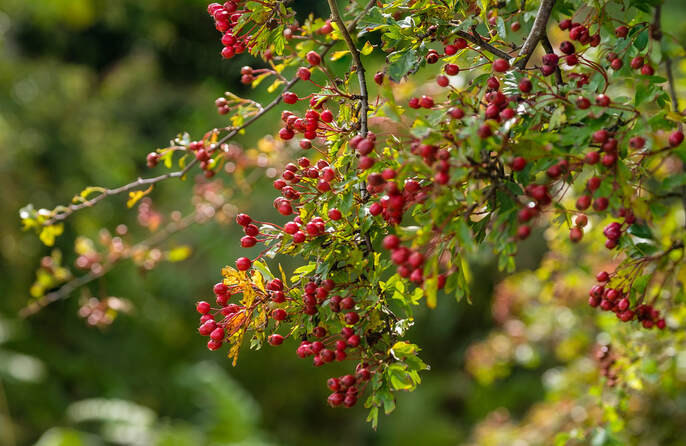